Following a season at the Jolly Sailor ground, Tamworth F.C. made the short move across the river Tame to start the 1934/35 season in the Birmingham Combination at the Lamb ground. The club have continued to use the site ever since, steadily improving the facilities as the Lambs progress up the non-league football pyramid.

The ground takes its name from the Lamb Inn, which stood for many years at the entrance to what is now the ground's car park. However, the first known use of the site was as a pig farm at the turn of the 19th century. It is believed that Kettlebrook Oakfield F.C. used the ground prior to the arrival of Tamworth F.C. In those early days, players had to change in the Lamb Inn and run down to the pitch, but facilities have been improved over time to include changing rooms, a clubhouse, sponsors lounge, coverered terraces and seating for spectators.

The Lamb acquired its original floodlights in 1969 from Scarborough F.C. and nine of the ten original pylons are still in place today. Football League side Gillingham were invited to play a friendly fixture to mark the official switch-on of the floodlights. This may seem a strange choice of opponents, but the Gills were invited because they were the club's first Football League opposition in the F.A. Cup. One of the 10 original pylons was removed to make way for the current main stand when it was constructed in 1996. 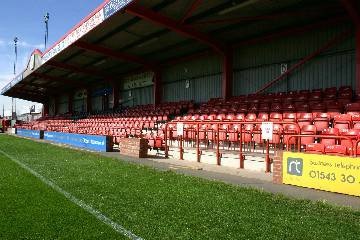 The Main Stand provides covered seating for 518 spectators. This includes six wheelchair spaces, reserved seating for home fans and visiting club officials and a designated area for use by the press.
Spectators are not normally allocated specific seats in the stand, although some seats are marked as reserved for season ticket holders.
The stand was constructed with the future in mind and has already been extended. If the Lambs were to relocate to a new stadium, the stand can easily be dismantled and moved to a new site.
It is located on the northern side of the ground, looking south across the pitch with the town centre behind.
Prior to the existing stand, wooden seating was provided in the same location, in a long low stand built in the 1940s

Surprisingly, none of the four sides of the ground have ever been officially named. A number of common names have been used over time and most parts of the Lamb can be refereed to by several names. The Main Stand side has previously been known as the North Side, the Popular Side and the Town Side, for example.

Opposite the Main Stand on the Kettlebrook side of the ground is a long terrace, commonly known as The Shed. Due to its low roof and metal construction, The Shed has become home to a number of the club's more vociferous supporters, the infamous Shed Choir.
This structure is one of the oldest parts of the ground and is clearly visible on maps and photographs dating from the early 1940-50s. With both the home and away team dugouts on this side of the pitch, the atmosphere in The Shed can be very lively.
At the western end of the Shed is the players 'tunnel', which separates the clubhouse from the terrace. This side of the ground is also known at the Cross Street side.

At the opposite end of the pitch is the Castle End, which is a large open terrace.
Work on this terracing was undertaken at the same time as the Main Stand was constructed in the summer of 1996. It was intended that this terrace would also be covered, but suitable foundations could not be built.
The clubhouse access road was moved behind the terrace though, improving safety and moving spectators closer to the pitch.
Numerous names have been used for this end of the ground, most of which relate to its past appearance or use. The area used to be formed from a grass and gravel bank, giving rise to the Grit End and the Grass Bank names. Scoreboard End or Clock End are other old favourites, while the Bottom End has become a common term in recent years. The most recent addition to this list is Peelers Way End, which is taken from the name of the road that now runs behind the ground.
Access can be gained to the ground through Castle End gates and this is also the vehicle access point and the entrance for the clubhouse on non-match days... 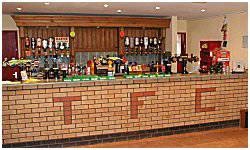 The clubhouse at the Lamb is open on match days and for other social or business events during the week. The current building is a mixture of new and old. The lower half of the building is the previous bar, which was originally the club’s office. The current bar area is built on the site of the old changing rooms. A small stage area has been added for social events and the building can be hired for private parties or business functions. (See the commercial page for more details.)
The clubhouse is normally open to visiting supporters for games where segregation is not in force.
Before its relocation inside the ground, the clubhouse was sited on what is now the Lamb car park, in a building that resembled a long green shed. In those days, the venue provided a very popular night-spot for the town's residents

Changing rooms and offices are situated adjacent to the clubhouse, behind the Shed. The changing rooms are portable and were obtained from Salisbury City when work on their Raymond McEnhill Stadium was completed.

The club shop is located outside the ground on the main car park and sells a range of Tamworth F.C. merchandise, including programmes, clothing and memorabilia

Catering facilities are located at the Castle End, by the clubhouse, and at the Meadow Street End. Both ends serve hot and cold food and drinks. When segregation is in operation, additional catering is supplied in the Meadow Street enclosure.

The match-day control office is near to the Cross Street entrance, although stewards are available in all sections of the ground should spectators require any assistance.

At the beginning of August 2014 the club were pleased to allow sponsorship of the ground and announced a link with O2 as the first ever sponsors, renaming the ground as The Lamb Ground. sponsored by O2 Tamworth.

The gently slopping pitch grass pitch was removed in the summer of 2016, flattened and replaced with a state of the art 3G FIFA 2-star rated surface by Slatters, which has enable to The Lamb ground to become a community hub and host numerous younger sides under the Tamworth FC banner.