West Bromwich Albion send a team to play the Lambs on Saturday 16 July (KO 3.00pm) and it will be another good test for the squad.

We caught up with Andy Peaks on Wednesday evening to look back at the game against Harborough Town and get his thoughts about the game coming up aganst the Baggies.

Andy was disappointed with his first loss in charge of Tamworth, especially as the winner was conceded with virtually the last kick of the game on Tuesday evening. “It was a bit of a reality check to be honest, but it wasn’t the end of the world. “I want to win things and I don’t like losing, but pre-season is about learning as a group and I did learn a lot at Harborough. “I did come away disappointed as I knew what to expect from the opposition - they have just got promoted, they are big, strong and direct. “A lot of football matches are won by set pieces and that is what caught us out. “We have got a lot of good footballers in our team, but I am great believer in that first and foremost you have to win the battle and earn the right to play and that is how it is going to be a lot of times this year and we didn't do that particularly well on Tuesday, certainly not in the first half, but better in the second. "We don’t want that feeling of being beaten in the last minute, even though it was a friendly it hurt me and it should hurt the players as well. "But on the other hand we learnt a lot and a lot of good has come out of the defeat if I am being honest. ”However the biggest disappointment for me was losing Kyle Finn to injury. "I was concerned about him and I spoke to him today (Wednesday) and he said it wasn’t as bad a he feared because he rolled it and fell on it at the same time thinking it may have been a break.”We are hoping it won’t be too bad but he will be out for a few weeks and may be touch and go if he starts the season. "

Moving on to Saturday against West Bromwich Albion will be a completely different test. “Yes it will, the friendlies have been designed to give us different scenarios. “I don’t expect them to be as big and strong as Harborough, but they will be really fit and good footballers. “It will be a different sort of game and one we are really looking forward to. “And again, one that will will learn a lot from, certainly looking at the weather it will be a test of our fitness! ”Andy is hoping that James Hurst will be available, but Alex Jones may still be a couple of weeks away as he continues to build his fitness following his long term injury.

Prices for the game on Saturday are as follows, there is no charge for a seat in the stand. Advance tickets are available from our ticket site on line here, and also on the day from the ticket office at the ground. There are no cash turnstiles. 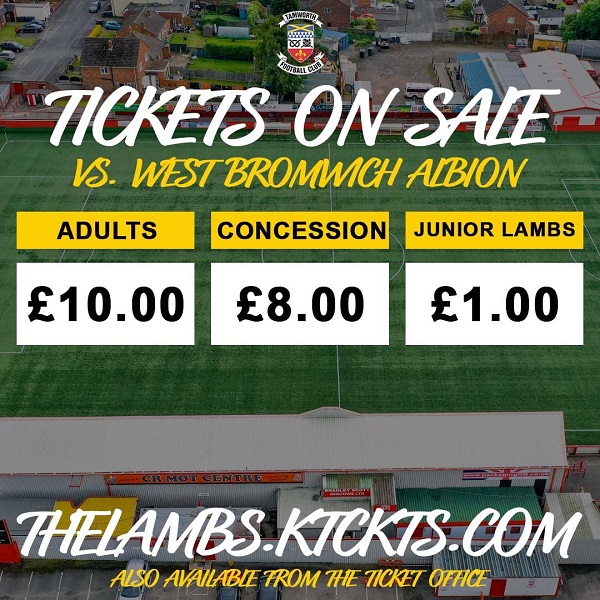