Andy Peaks Speaks about the New Signing, and More!

Andy Peaks is delighted to capture his latest signing with Matt Curley, joining from NPL Champions Buxton. He is also thrilled that Dan Creaney has agreed to commit himself to the Lambs for the new season.

Right Back Matt Curley originally signed for the Lambs from Sutton Coldfield Town under Andy Morrell in 2017, He then moved on to Hednesford Town before signing for Buxton at the start of 2020. “I have tracked Matt for a while, and even though he could have stayed at Buxton where he won promotion to the National League, he is attracted to our club. “He is a solid player who likes what we are trying to do here and our ambition to do well at Tamworth. “I identified the back 4 as a key area to stabilise when I came in, hence why I have strengthened most of the areas within it. "It is important to have quality competition in all positions."

Andy is hoping to announce a couple of new signings next week but was very happy to share that Dan Creaney has agreed to sign for next season. “I have had some good conversations with Dan and agreed a deal with him. “He loves the ambition of the club and the quality of the players we have brought in, and he is very happy to sign. “I like Dan, he has been good for me and he said that he enjoyed the period from when we came in. “Dan is an important player in attack as well as defending set pieces and I am delighted that we will have him next season and that I can work with him again.”

Team Builder have agreed to sponsor Dan for next season and Tamworth FC are grateful for their support. 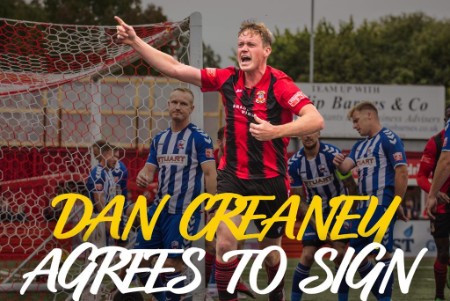 We will have interviews with Matt and other new signings in our next newsletter.