A packed clubhouse celebrated the end of season in style following a 1 - 1 draw with St Ives Town as supporters, players and officials joined together to find out who had won the various trophies.

There was a successful Team Builder auction, which added to the collection at the game, saw nearly £700 raised. The committee express their sincere thanks for all those that contributed.

Pictured below is Henri WIlder with his two awards 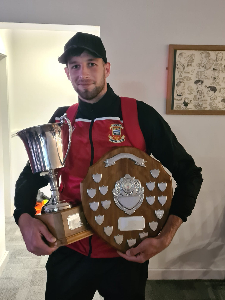