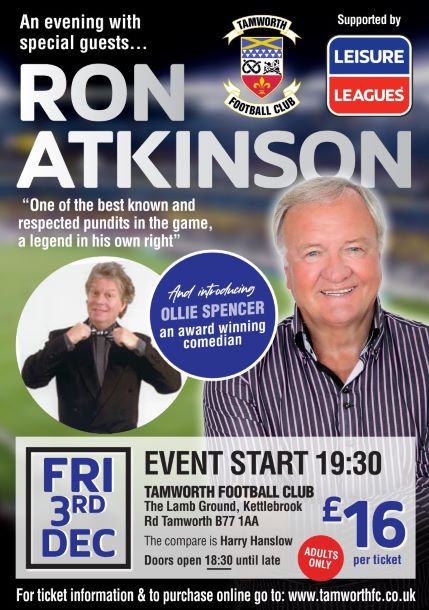 We are delighted to welcome Big Ron to the Lamb on Friday 16 December alongside Comedian Ollie Spencerand host Harry Hanslow.Big Ron will be telling stories from his glittering career in Football both as a player, manager and football pundit.

As a player he started his career with Aston Villabefore moving to play for Oxford United where he played 384 games, leading them as Captain from the Southern League to Division 2 of the Football League.

Ron moved onto management at the age of 32 with Kettering Town in 1971. It was while he was at Kettering that he brought his team to play Tamworthin a Southern League Cup fixture which the Lambs won 2 -1 in front of a gate of 819 on 29 Oct 1973.

In 1974 he moved onto Cambridge Unitedwhere he stayed for 4 years. He led them to promotion in 1977 and they were on the verge of promotion to League 2 when he left to join West Bromwich Albionin 1978. A successful time at the Baggies with top 3 finishes in the first division and a UEFA QF spot attracted the attention of Manchester United who signed him as their manager in 1981. He remained at United until 1986 and in that time they won the FA Cup twice, achieved five successive top 4 finishes in the league, and semi final places in European competitions. making the most successful manager since Sir Matt Busby.

After leaving United and having a short spell with the Baggies, Atletico Madrid and then Sheffield Wednesday where he won the Football League Cup and promotion to the First Division Aston Villa came knocking in June 1991. He led Villa to second place in the first season of the FA Premier League (the highest place achieved by an English Manager equalled only by Kevin Keegan) and then winning the League Cup at Wembley in 1994.