Lambs Triumph in Penalty Shoot Out 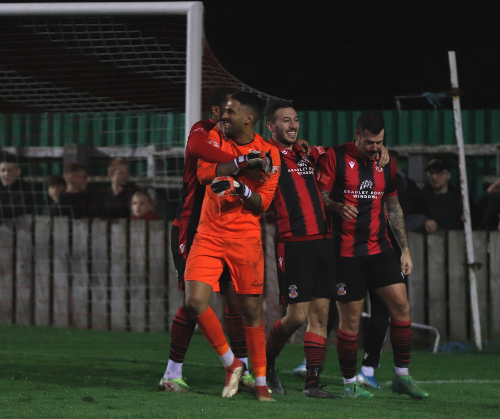 Jas Singh is fast becoming a hero of penalty saves as again he was at the centre of a penalty shoot out which saw Tamworth claim victory in a tough Buildbase FA Trophy tie at Colne.

In a nail biting conclusion in this first ever fixture between the two sides, the Northern Premier League West outfit had taken the lead with a stunning free kick from Ryan Taylor in the 77th minute. Just two mins later and the scores were level when Ryan Beswick fed Tyrelle Waite, who pushed the ball past the advancing keeper.

Tamworth converted their first 3 penalties in style from Beswick, Alex Taylor and Jack Thomas, while the hosts saw the third of their first 3 spot kicks strike a post. Ryan Tait saw his penalty saved and when Aaron Forde converted penalty number 5 it was Jas Singh who then saw off Colne with an excellent save to deny Lee Pugh. (Jas is seen being congratulated by his team mates. Pic. Dave Brown)

So we are in the hat for Monday’s draw and as a consequence our home league game with Peterborough Sports will be rearranged.

We hope to see as many fans as possible on Tuesday evening as Tamworth look to extend their unbeaten run and claim an important victory over visitors Banbury United at the Lamb (KO 7.45) You can purchase your tickets in advance here

Lest we forget… A one minute silence was held before kick off to remember Armistice Day and think about all those that gave their lives to bring peace. (Pic. Dan Arrowsmith)