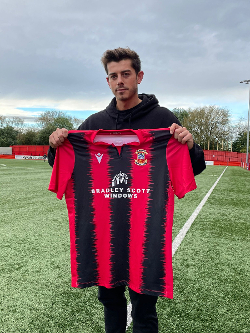 The Lambs are delighted to welcome new signing Alex Richard Jones. The experienced 27 yrs old striker, who stands at 6ft 1in, has an impressive C.V having plied most of his trade in the Football Legaue and was playing for Nothampton Town in the EFL Legaue 1 at the end of last season.

Alex is a local lad from Sutton Coldfield and was educated at King Edwards School in Lichfield. He started out his career at West Bromwich Albion's academy before signing his first professional contract with the Baggies in 2014. With the club not taking up the option of a second year Birmingham City snapped him up. Depsite not making a break through into the first team he spent spells on loan with Grimsby Town (National League) and League One Port Vale (9 goals in 19 games). He moved to Port Vale for a further 5 months loan spell in Aug 2016 and scored 6 goals in 8 games in his first two months there bagging 10 in 21 at the end of his loan period. In Jan 2017 Alex left Blues to sign for League One outfit Bradford City on a 2.5 years deal scoring 5 goals in 15 apps including an appearance at Wembley in the play off final defeat. He made a great start to the next season scoring 5 in 11 games before injuries ruled him out of action for almost a year. With a new manager in place at City, Alex's opportunities were limited, so he went out on loan to Cambridge Utd (league 2) to get game time scoring one goal in 12 apps. At the end of his contract he was released by City and in July 2019 he signed for Scottish Championship outfit Partick Thistle. He left Scotland after a year due to the pandemic and linked up with Northampton Town in March 2021 where he scored one goal in 9 appearances. In his career to date Alex has 95 professional appearances scoring 25 goals. Alex will be in the squad for the game at Barwell on Saturday.

Why not check out some videos of Alex in goal scoring form for Bradford City, Cambridge United and Northampton Town.....

Welcome to the Lamb Alex!