Singh the Hero as Lambs Progress in Trophy 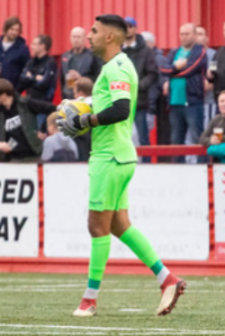 Injury hit Tamworth travelled to face the Tulips in a banana skin cup tie and came away victorious thanks to goalkeeper Jas SIngh who was the hero of a penalty shoot out with the scores level 1 - 1 at full time.

Only 6 players that featured against Notts County were in the starting line up today and the back 4 had a very unusual look to it with a pairing of Ben Hart and Chris Cox as centre backs with Issac Currie making only his 3rd appearance at right back and Callum Cokerill-Mollett making his debut at left back. Jack Thomas returned having missed the game on Tuesday evening and Bradley Birch also featured in midfield. Chances were rare for both sides throughout the game but Shaq McDonald broke the deadlock in the 62nd minute heading home a set piece flag kick from captain Ryan Beswick. It looked like this would be enough for the Lambs, but a foul in the area with 5 mins remaining saw the hosts convert the spot kick. Into penalties and it was a perfect start with Jas Singh (pictured) saving the first two that were aimed at his goal and Ryan Beswick and Shaq McDonald put Tamworth’s noses in front. Jack Thomas hit home penalty 3 and Aaron Ford converted penalty number 4 to give us a 4 - 2 win and a place in Monday’s draw.

During the first half Ben Hart was taken to hospital after a nasty clash of heads with Jas SIngh, Ben was released from hospital on Saturday evening and we wish him a speedy recovery.

The First Round Proper will take place on Saturday 13 November which means our game against AFC Rushden and Diamonds will be rearranged.

You can read a full match report here

Tamworth are next in action on Tuesday evening at Lye Town in a BIrmingham Senior Cup tie. Full details of the game can be accessed here