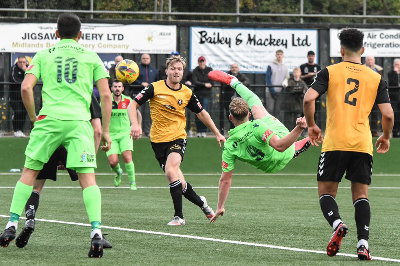 Creaney at the Double!

A travelling support in excess of 350 expectant Tamworth fans made the short journey to Dales Lane, the home of Rushall Olympic. Nobody in the crowd could have predicted the explosive way the game was going to end - in ecstasy for the Lambs and dismay for the Pics.

The game was a great advert for the league, played between two teams who at times played some good football without seeing any rewards for their efforts. The best chances fell to the Lambs in the first half, with Rushall picking up the pace of the game in the second half resulting in some lengthy spells of defending for Tamworth. Rushall's pressure finally paid off in the 84th minute when Mitchell Clarke powered home a header from a set piece corner. As we have seen from the Lambs this season they showed steely spirit and with the game pushing into stoppage time a second corner was not cleared by the home defence and as the ball came back into the danger area Dan Creaney sent the away fans wild with an excellent overhead kick (pIctured above captured by Richard Bowcott) . However, the show was not over when a great movement resulted in the winner. Creaney fed Jack Concannon on the right and after he picked the pocket of the full back sent in a perfect cross which was met by Jack Thomas who fed the ball back into the danger area for Creaney to stab home - cue even more wild celebrations. People will debate if the Lambs deserved all 3 points, but for determination alone these points could be crucial at the end of the season.

Next up is the visit of Stourbridge on Tuesday night and you can get you tickets here, with Tickets for the Notts County FA Cup tie on sale at the game.