French Midfielder Snapped up by Lambs 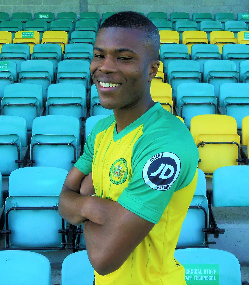 Tamworth have signed Frenchmen Louis Augustin Malandjou Kondjo. He joins after training with the Lambs for a couple of weeks, but was unable to be announced until International clearance from the FA of Wales was received on Friday (yesterday). The midfielder has been without a club since leaving Welsh Premier outfit Caernarfon Town in July ‘21.

Louis spent his early years playing in France and Switzerland before he was signed by Championship outfit Nottingham Forest in 2013. He didn’t make the grade at Forest, so moved back to Europe where he had spells at clubs in Switzerland, Cyprus and Portugal.

He returned to Britain in January 2020 signing for Welsh Premier outfit Bala Town before switching to rivals Caernarfon Town in July 2020.

Welcome to the Lamb Louis!