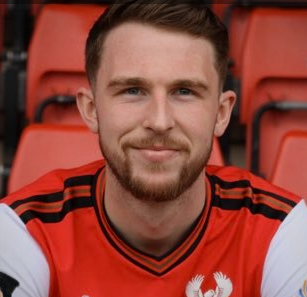 James (Jim) Kellermann has joined the Lambs from Chesterfield on an initial 28 days loan. The 25 yrs old centre midfielder started out at Wolverhampton Wanderers and spent 5 years there, leaving at the age of 21 to sign for Aldershot Town in the National League. He spent 2 years at the Shots making 67 appearances, scoring 8 goals in the process. He also represented the England C team. At the end of the 2017-18 season Jim was signed by Scottish Premiership outfit St Mirren, however, a new manager came in and had different plans, so Jim moved to Fylde on loan in the National League. He left St Mirren and joined Kidderminster Harriers last season where he made 4 appearances before Chesterfield came in for him. Welcome Jim and we trust you have a successful spell at the Lamb.