Jack Concannon is a Lamb! 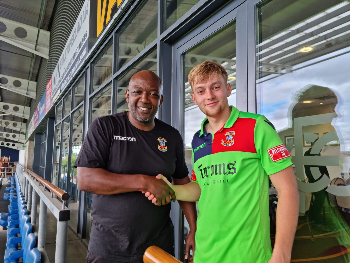 It's a big welcome back to 21 years old Jack Concannon who already is a Tamworth favourite after his successful period on loan at the Lamb in the 2018-19 season. Jack joined the Lambs on 22 December 2018 and made his debut in a 2 – 1 home defeat to St Ives Town under Dennis Greene. Jack quickly established himself as a first choice and went on to make 21 appearances in his loan spell scoring 6 goals. His success at Tamworth resulted in Blues offering Jack a new contract where he went on to make his first team debut, but 2 years later many people were shocked to see him released. We are delighted to welcome Jack back to the Lamb, and he immediately impressed in his first game back at Chesterfield on Saturday.

Pictured is Gary Smith welcoming Jack after he had signed on the dotted line after the game.