Support Jas in his New Challenge 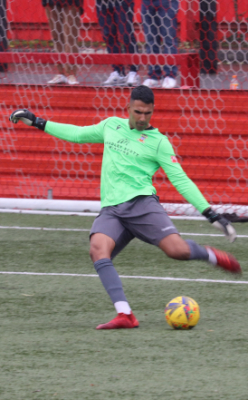 As we enter another lockdown Matt Panter caught up with Jas Singh to discuss his new challenge and his thoughts about the season so far. During this period our mental health is set to be tested once again, so the timing of Tamworth keeper Jas Singh's new charity challenge couldn't be more appropriate. As a fitness instructor, who knows the benefits exercise has on our mental as well as physical well-being, Jas is passionate about charities such as MIND. And as a result, he's hoping to raise funds for the charity with a new 100km Challenge.

"My friend Conor McManus and I started a business, Collective Fitness, a couple of years ago now," he explained. "We have come up with a fitness app that we plan to launch to coincide with a charity event we will do. "Fitness tends to sell where everyone wants six packs, biceps etc but we want to move away from that and promote the fact you can live a healthy lifestyle without looking pristine all the time. We want people to feel good, mentally and physically." He added: "So while we are promoting that we want to raise some money for MIND and we agreed to do 100km in one day so it will be a 50km row and 50km run. "We will do a 5k row, 5k run and alternate between the two on the day. "It was due to be November 29 but we'll have to see what restrictions are in place. "It means a lot to us, the charity, as people but also as a business and we try to highlight and promote the mental health side of fitness. "More now than ever, men speak about their mental health. Even at non-league level, people don't realise how mental health can be affected. "It is a ruthless business and sometimes it can be a hard place especially for young footballers who get a reality check and don't understand why things aren't working straight away. "It can be cut throat because you can lose your job instantly whereas at the top level of the game you are contracted and have a secure income. "I know young lads who only have this as a job so when it's taken away it can be difficult at times. "Touch wood, we are looking to raise £5000 and we want to get some traction on it so hopefully I can get some support from Tamworth fans."

Meanwhile, Jas has been satisfied with the way the Lambs have started the campaign. "We have shown a real spirit," said Singh. "We have come back in more games already this season than last year. "It's been hard but the fact we are still getting results when we are not playing as great can only be positive. "We want to play a certain way and the new lads have to get used to that but the fact we haven't had a settled XI, which we haven't had all season, has affected that. It has been taken out of our control with injuries and coronavirus. Hopefully things will be able to return to some kind of normality soon and we will be able get some continuity and can settle into a
pattern."