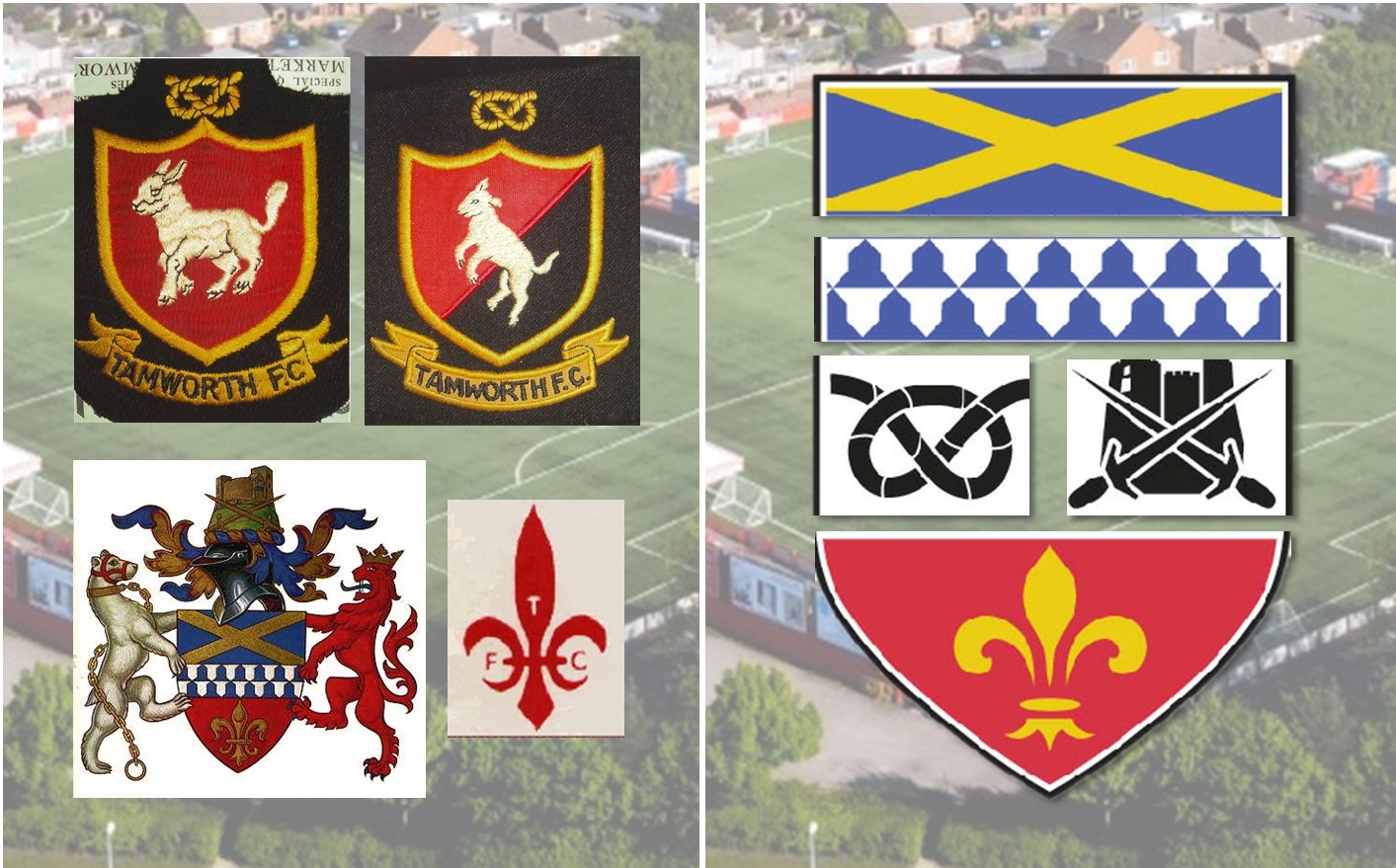 The history of the Tamworth Football Club badge

Early photographic records of the Tamworth FC kit show that the team played in a plain shirt with no badge.
As fabrics and embroidery techniques became more advanced a couple of designs incorporating a Lamb appeared on kits in the 1950s. For those that may not be aware, a Lamb was chosen to reflect the club’s nickname after The Lamb Inn pub which once stood where the newest houses are built on the entrance to the car park off the Kettlebrook Road.

From the 1966-67 season a 'Fleur-de-lys' design, incorporating the letters TFC was used.
It was presented to the club by Tamworth Borough Council on 1st June 1966 in honour of the team's successes during the previous season and comes from the Borough’s 17th Century seal. The Fleur-de-lys can also be found on the Council’s coat of arms (above left).

The current Fleur-de-lys design was then incorporated into the current motif in the summer of 1988 and was designed by the club secretary at the time, Pete Young.
The five sections of the badge are described below;

The Saltire in Chief
The gold on blue ‘Saltire in Chief’ is from the arms of the Kingdom of Mercia. When Offa came to the throne of Mercia in 757 AD, he made Tamworth his chief residence and built a palace there.

The Fess of Vair or Fesse Vair
The horizontal band comes from the arms of the Marmion family, Lords of Tamworth from 1014 - 1291.
It can also be found on many heraldic shields inside the Castle and a stone version sits above the entrance through the Castle keep on Lady Bridge.

The Stafford(shire) Knot
The origin of the Stafford Knot is shrouded in the mists of antiquity, but it can be said that the somewhat barbaric tale of a certain Sheriff who invented it to hang three criminals with one rope at the same time may be dismissed as an imaginative effort. The earliest authentic appearance of the Stafford Knot is on a seal in the British Museum. This was the property of Lady Joan Stafford, who became Lady Wake. The Knot was passed down through the Earls of Stafford Family and as the days of feudalism passed and individual and civic liberties grew, it was gradually adopted by the citizens, Freemen and Burgesses until ultimately it was included in the Stafford Borough Coat of Arms. Strictly speaking, this ornament should never be spoken of as the Staffordshire Knot. It was a badge of the Stafford Family and as such it is linked definitely to the Borough of Stafford.

The Castle and Crossed Swords
The castle motif, of course, represents Tamworth Castle which is of Norman motte & bailey design with a shell keep similar to Restormal and Launceston Castles in Cornwall. The present stone structure replaced the first timber tower surrounded by a palisade, which was built shortly after the Norman Conquest in 1066.
The crossed swords in front of the castle represent the office of the Champion of England, which was first granted to Robert Marmion in the reign of William the Conqueror. After the male line of the Marmions died out, the duty passed to the Dymoke family via marriage through the female line. Sir John was the first Dymoke to exercise the office on 16th July 1377, at the Coronation of Richard II, and the Dymoke family of Scrivelsby, Lincolnshire have continued to hold the office up to the present day.

The Fleur-de-lys
As described above.